I was on my way to a meeting in Salt Lake City and I looked out the airplane window to my left and saw in the distance spires rising out of the Nevada desert. Are those granite? There, close to the Black Rock Desert (aka home to Burning Man)? I looked at my watch to make sure I had enough time before my meeting in Salt Lake City, then banked the plane and descended for a closer look. The spires were indeed granite and looked tall enough for some interesting rock climbing. I circled a few times, took some photos then banked away towards my meeting.

Research turned up very little about the place.  It seems to be a relatively unvisited part of Nevada.  So that settled it. Betsy and I had to go to this remote area of Nevada and find out what is really there.

There were no airports or dirt strips close to where we were heading so Betsy and I headed out in our van after work on a Friday, stopping in Reno for dinner and then out into the Nevada wilds. We first ran into a rainstorm and flash flood, and wondered why every time recently when we drive into the Nevada desert where it never rains, it rains.

Soon we were on a decent mud-free dirt road, heading into the darkening desert. 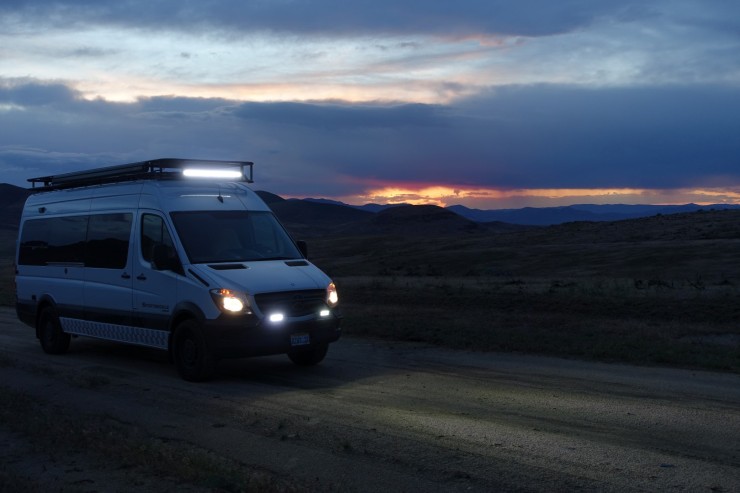 In spite of GPS and modern Google/Bing Satellite previews of the roads, at one point during the evening we took a wrong turn and drove down to a gated private ranch – and we couldn’t back up in the mud nor could we turn around. We could only go down but were block by a gate. We crawled through a barbed wire fence, a cattle dog warily circling and barking, and slowly approached the ranch house. It was surrounded by corrals, pickup trucks and long multi-horse trailers – so I felt better that it was probably a cowboy’s bunkhouse rather than a private ranch with an old rancher sitting on his rocking chair with a rifle in his lap. Sure enough a couple of guys answered the door and said the gate wasn’t actually locked, it just looked like it and we could unwrap the chain and drive through. In fact, they said we could drive though a road on the ranch and meet up with the correct road later.

We spent the night just off the dirt road before we hit the “less traveled” road in the morning. It was definitely less traveled.

I had learned a well-known 4×4 technique after being stuck in the mud previously. Let the air out of your tires, all the way down to 25 lbs or less (from 50). It works! Which means we have a new air compressor for the van.

The soft-tire bit really did the trick! Until it didn’t.

We bent the propane filler attachment and crammed dirt into the van’s battery box but didn’t seem to do other damage. We do have a satellite emergency beacon and lots of extra water but getting stuck out here would not have been fun.

We finally make it. Not to where I had planned because another dry creek crossing scared us, but we certainly can’t complain about the camp site:

But don’t let your guard down. Right to the left from where this photo was taken Bodie, one of our dogs, leapt straight up like a cat and a buzzing sound ensued. Betsy and I stepped forward to inspect the rattlesnake under the rock, but not until I later looked at the photo on the computer did I see the second snake! We were close to that snake!

Betsy found a really cool spot where perhaps Indians made arrow heads. There were flakes of obsidian everywhere. We collected some of it for this photo, then spread it out again.

Oh yes, we came to climb. It was great and we did some probable first ascents. Betsy ended up leading the first crux pitch of a delicate climb called “South Spring Arete”. There were places for natural protection but you had to seek them out. The rock is rough and a little crumbly in spots on this spire.

There are many springs in the area which cows, wild horses, wild burros and one small fawn enjoy. We saw a lot of burros on the way in and out.

We also put up a couple of shorter fun climbs.

We found a grassy area / oasis we called Shangri La, hidden from the wild horses or even deer because of the rock climbing required to get there.  We almost expected mini-dinosaurs to be living there, undiscovered for centuries.

We were so tired at the end of the weekend we didn’t even make it home. We pulled over in Tahoe Sunday night at a hidden spot to sleep, then continued on early Monday.

The Lava Beds are also known as Elephant Land which comes from research that shows that desert rat and well known Nevada climber Alvin Mclane (passed away in 2006) discovered this place in the 60s. He was known for keeping secrets but for this place he didn’t. He brought National Geographic out here and the results were published in 1983s “America’s Hidden Corners: Places off the Beaten Path”. I found an old copy on Amazon and bought it. The article’s author calls it a climber’s paradise and Alvin names it Elephant Land. It is better known as The Lava Beds for 4×4 enthusiasts and Chukka hunters, although it is misnamed as a miner looking for Tungsten in 1921 said, “…but so far as has been ascertained there is not a pebble of lava in the range”.